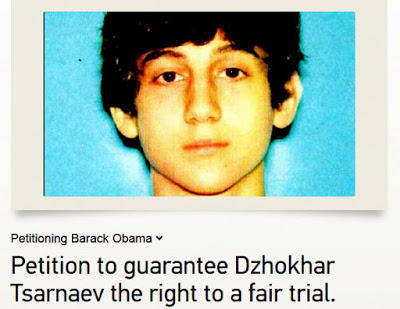 Over 10,000 nutjobs have already signed.

We believe that within the chaos caused by the Boston Marathon explosion, two young men were wrongfully accused of something they did not do, and one of them has lost his life before even getting the opportunity of a proper trial. We do not wish to see blood of yet another innocent victim, someone who, by U.S. law, is innocent until proven guilty. It is vital to end this persecution, as all the conflicting information shown by the media, and footage from the incident, seen by people from all corners of the world, doesn’t manifest itself as enough evidence to condemn Dzhokhar Tsarnaev of this heinous crime.

One presumes these are the same people that believe Sandy Hook was a federal plot.