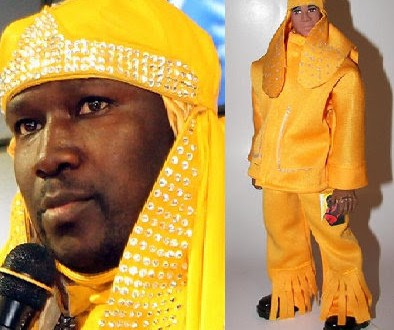 The Black Israelites can often be found in Times Square wearing their Earth Wind & Fire costumes and screaming about sodomites and how Black Jesus is going to come back any day and kill every white person.  This week they’re in the news because they’re rilly rilly mad that the talking doll they ordered in the likeness of their leader doesn’t look like him and “isn’t black enough.” So they’re suing.

The Israelite Church of God in Jesus Christ says the Connecticut toymaker put “pointed noses and faces” on the dolls. And half of them “were light brown” instead of “dark brown,” the court papers state. Now the church wants its $45,000 down payment back from the Vicale Corp. and is seeking another $120,000 in damages, according to the lawsuit filed in Manhattan. Toymaker Emil Vicale said an “obnoxious” customer named Jason Moody put in the doll order, and approved the design and the skin color. And he intends to countersue. “I’m so angry with these people,” said Vicale. “We had just 2 1/2 weeks to put it together. . . . The whole job was very, very peculiar.” Once known as the Israeli Church of Universal Practical Knowledge, the church says blacks are one of the lost tribes of Israel. They’ve been branded a hate group by the Southern Poverty Law Center.

The Black Israelites ordered 1000 of the dolls at a cost of $70 each. The toymaker also makes a machine gun-toting “Obama action figure” and an anatomically-correct Anthony Weiner “Tweet This” doll.