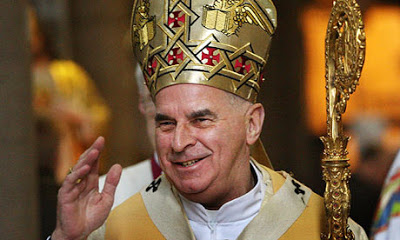 O’Brien has already confessed and resigned, so one presumes the investigation will be aimed at rooting out all of his victims.

The Congregation for the Doctrine of Faith, the Vatican council charged with confronting major transgressions by clergy, will likely launch an investigation into Cardinal Keith O’Brien once the new Pope is chosen. The Catholic Church in Scotland has been plunged into crisis after the Cardinal admitted in a brief statement on Sunday evening that allegations against him from three current priests and one former clergyman that he sexually molested them had some substance. After initially threatening the journalist who broke the story with legal action, O’Brien admitted in his weekend statement that his sexual conduct “had fallen below the standards expected of me”.

The investigation likely won’t begin until after the new emperor is placed on the jewel-encrusted golden throne.