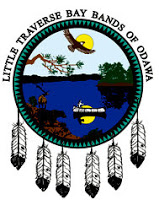 Last week I noted that the Little Traverse Bay Bands of Odawa Indians had legalized same-sex marriage.  Today Michigan will see its first such wedding.

Planning a wedding in less than a week doesn’t bother either Tim LaCroix or Gene Barfield. Arrangements still undecided — what to wear and who to call since there is no time to mail invitations — seem not to bother the couple. “We ordered some wedding cupcakes and that is about it,” LaCroix jokes. For 53-year-old LaCroix and 60-year-old Barfield both of Boyne City, their wedding Friday will be about finally having their 30-year relationship recognized. It will also be a historic statement. The couple will be the first legal same-sex marriage in Michigan under the amended Little Traverse Bay Bands of Odawa Indians marriage statute, which is expected to be signed at 10 a.m. Friday. Tribal sovereignty will protect their marriage from both a 2004 Michigan constitutional amendment and the federal Defense of Marriage Act — being debated in the U.S. Supreme Court — defining marriage as between one man and one woman.

Just wanted to let everyone know that if and when the Tribal Chairman signs this into law that my partner and I have already obtained our marriage license and application. We have been together for 30 years and we are both veterans who met while we were in the service. We have been waiting for Michigan to pass it and hopefully they will do it soon. Luckily my tribe is ahead on this issue.

We wish them the best!

Previous Hashtags For Facebook
Next Where Will You Be?