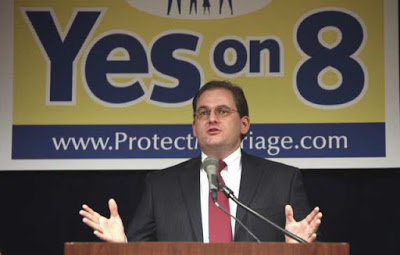 “Maybe it’s just me, but it seems that some ‘journalists’ covering the Prop 8 case are downright giddy about the possibility of marriage being re-defined by unelected judges. No wonder most of the media coverage of Prop 8 bears no resemblance to the reality that most Americans still favor protecting marriage as the special union of the opposite sexes.

“But I’m confident that Tuesday morning, at 10 a.m Eastern time (7:00 a.m. Pacific), as the justices file into the courtroom, the buzz of the media will fade away and the focus will return to where it belongs—to the text of the United States Constitution and the key legal question of whether states must recognize same-sex relationships as ‘marriage.’

“If you can, please join us in prayer and sacrifice at this crucial hour. We’re honored to represent you in fighting to uphold the people’s right to maintain traditional marriage, and we look forward to winning this epic contest together.” – Protect Marriage general counsel Andy Pugno, via email.

Previous Paris Haters: We Totally Had 1.4 Million
Next Headline Of The Day