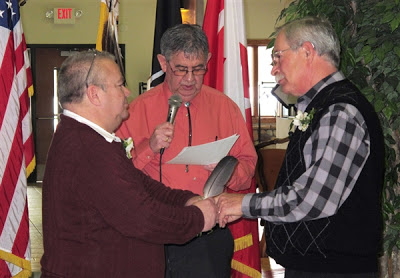 Dexter McNamara, chairman of the 4,600-member Little Traverse Bay Bands of Odawa Indians in northern Michigan, wed Tim LaCroix, 53, and Gene Barfield, 60, of Boyne City. After McNamara read the couple’s vows and led the ceremony in English, a member of the tribe followed and conducted a tribal ceremony in their language. “How could the world be better? How could the world be better? … I’m just full of joy and happiness and I love my husband,” Barfield said. “We’re so unbelievably grateful to the tribe and so full of respect for their position in this.”

The couple met 30 years ago when they were stationed at Orlando’s Naval Training Center.

UNRELATED: My family briefly lived on that base when we first moved to Orlando.  I learned to drive on the deserted access road around the base parade grounds, the one place my mother knew I wouldn’t crash into other cars. Not long after that, I was dropping swabbies off at the front gate after meeting them at the Parliament House. Good times.