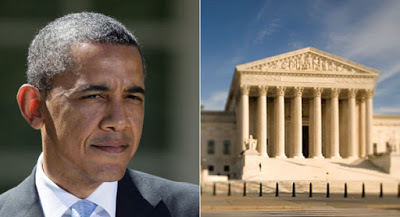 Obama On SCOTUS: No Predictions

Yesterday President Obama spoke with the nation’s two largest Spanish-language networks regarding this week’s marriage cases before the Supreme Court.

“I never predict what the court will do. But I used to teach constitutional law, and there is certainly a strong basis for determining that in this age, given what we now know, given the changes that have been taking place in the states around the country, same-sex couples should be treated fairly and have the same rights benefits, be able to transfer property, all the rights and recognitions that heterosexual couples do.”

“I think it is time for the justices to examine this issue. I think not only is it right and fair but also consistent with our Constitution to recognize same-sex couples It doesn’t mean everybody has to agree from a religious standpoint about this issue. It does mean that it is very important for us to remember that we’re a nation where everybody is supposed to be equal before the law.”