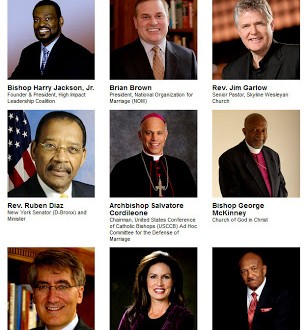 NOM’s Hate March: A Cavalcade Of Crackpottery And One Catholic Drunk

NOM today published the above list of speakers scheduled for their hate march on the Supreme Court.  Hopefully there’ll be an open bar for busted drunk driver Archbishop Salvatore Cordileone and an emergency Botox station for Concernstipated Women head Penny Nance.  And we can only presume that New York state Sen. Ruben Diaz will bring along the same speaker who told attendees at the last NOM hate march that homosexuals are “worthy of death.”  As for “Bishop” Harry Jackson, let’s just hope he doesn’t curse the Washington Blade into bankruptcy, as he claims to have done with other “Satanic gay publications.”  DC police should also keep an eye on Jim Garlow, who has called on pastors to emulate to the Founding Fathers and “pick up a musket” against evil homosexuals.