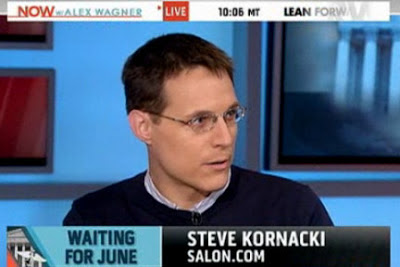 Openly gay Salon senior writer Steve Kornacki will return to MSNBC to anchor the weekend slot held by Chris Hayes, who is moving to the weeknight position to be vacated by Ed Shultz.  Kornacki previously co-hosted MSNBC’s The Cycle.

Steve Kornacki hopes to maintain a sense of continuity for viewers even as he develops his own style for the show. “We want to try to work with the template they’ve created,” said Kornacki in a phone interview with The Hollywood Reporter. “Obviously, I’m not Chris, Chris isn’t me. I can’t be a carbon copy of him. If I tried to be, I’d fail, the show would fail. They’ll be some differences, but they’ll sort of evolve.”