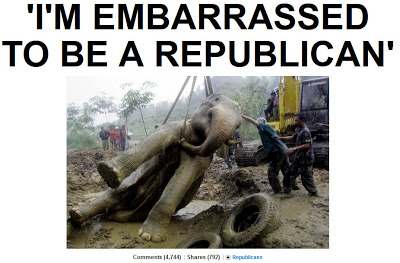 Today’s front page headline at Huffington Post comes from GOProud’s Jimmy LaSalvia, who appeared at a well-attended CPAC panel titled “A Rainbow on the Right: Growing the Coalition, Bringing Tolerance Out of the Closet.”  Michelangelo Signorile reports:

“I’m embarrassed to call myself a Republican right now,” Jimmy LaSaliva, co-founder and president of the gay conservative group GOProud, said at the Conservative Political Action Conference in National Harbor, Md. At the packed panel, attended by younger CPAC members, including quite a few conservative gays and lesbians, conservative commentators and activists on the panel who support marriage equality, including CNN pundit Margaret Hoover and Washington Post columnist Jennifer Rubin, made the case for gay marriage as conservative value.

Asked why GOProud endorsed candidates like Mitt Romney, who supported an constitutional amendment banning gay marriage, said that was old news. “Mitt Romney is as relevant as Mike Dukakis is now,” he said. “So let’s not talk about the past. I know that it’s embarrassing to call yourself a Republican right now. I’m embarrassed to call myself a Republican right now. The question is, ‘Are we going to be able to build new coalition that can win, that includes gay people, or not? Are they going to become the Dixiecrats or are they gong to go on and win elections?’”

Hit the second link for an audio clip of Signorile’s interview with LaSalvia.

UPDATE: Here are LaSalvia’s opening remarks at the panel.