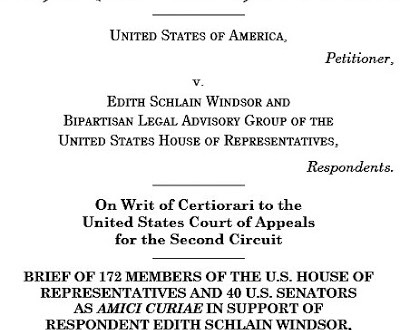 Half Of Congress Files DOMA Brief

Almost half of the sitting members of Congress today filed a joint Supreme Court brief in the support of the overturn of DOMA. Via press release:

These 212 Members decided to participate as amici in this case because they want the Supreme Court to hear the full story from Congress, and to explain why they believe that Section 3 of DOMA is unconstitutional.  They disagree with the arguments being made by lawyers hired to defend DOMA in court by the House Majority following the divided 3-2 vote of the House Bipartisan Legal Advisory Group (BLAG).  The amicus brief filed today makes clear that BLAG does not speak for Congress, and that many members believe that Section 3 should be struck down because there simply is no legitimate federal interest in denying married same-sex couples the legal security, rights and responsibilities that federal law provides to all other married couples.  As the brief explains: “DOMA imposes a sweeping and unjustifiable federal disability on married same-sex couples.”

Hit the link for the full list of signees.