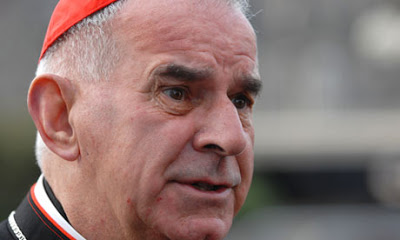 The Vatican knew of allegations against Cardinal Keith O’Brien five months ago, it was claimed today. Reports said a priest lodged a complaint in October about “inappropriate behaviour” by the former Archbishop of St Andrews and Edinburgh in 2001. The priest is said to have written directly to Rome because he did not think he could trust the church hierarchy in Scotland to handle the matter.

His claim is said to have been taken seriously and led to the Vatican contacting Cardinal O’Brien and a “deal” being brokered by Cardinal Marc Ouellet of Montreal for the departure of the leader of Scotland’s Catholics. Cardinal O’Brien quit as archbishop on Monday following revelations at the weekend about allegations from three other priests and one former priest of inappropriate behaviour dating back to the 1980s. The cardinal contests the allegations.

This is the fifth priest claiming to have had sex or “inappropriate contact” with the Cardinal.