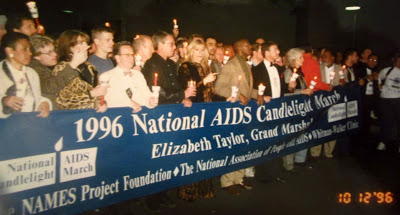 I was going through my ex’s photo albums here in Fort Lauderdale last night and found this shot I took at the 1996 National AIDS Candlelight March in Washington DC.  That’s NAMES Project founder Cleve Jones near the center, with Judith Light to his left.  Further to the right in the grey jacket is Betty Buckley.  On the far left is current DC House Rep. Eleanor Holmes Norton and to her left in the leopard jacket is Valerie Harper. The gentleman in the white suit is Jim Graham, who is now on the Washington DC City Council.

Elizabeth Taylor was ill that weekend and participated in the march from a golf cart, but I couldn’t get near her due to a mob of press and only got a blurry photo of the back of her head as she went by.  It was an unspeakably moving night and the next day President Clinton and the First Lady walked with Cleve to view the Quilt, which spanned the Mall from the Lincoln Memorial to the Washington Monument.  Today the Quilt is headquartered in Atlanta, where JMG reader Gert McMullin oversees its safety and makes laborious daily repairs as panels return from displays around the world.