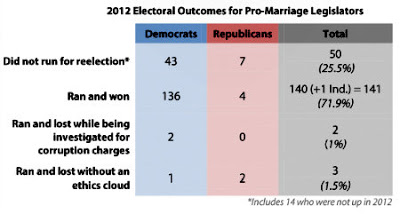 97% Of Marriage Backers Got Re-Elected

Here’s a nifty little stat that NOM will surely ignore.

Based on election results in the two states that passed freedom to marry laws in the 2011-2012 legislative cycle and whose members stood for reelection — New York and Washington — the analysis, “Pro-Marriage Legislators Win Elections,” finds that pro-marriage legislators who ran for reelection won 97% of the time. This is significantly higher than the national incumbent re-election average of 90% in 2012.