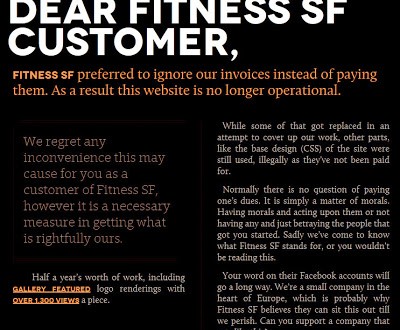 The Europe-based webmaster of the Bay Area’s Fitness SF chain has “impounded” the company’s website and posted a blistering claim that his invoices are being ignored.

I am writing this on the behalf of the tens of thousands of freelancers and small businesses out there facing larger corporations who can afford to starve them out. In the movie / visual effects business this is already prevalent. Large studios awarding work to smaller studios or freelancers in the hope they won’t stand up to them when it comes to loads and loads of unpaid work. What Fitness SF is trying here is exactly the same ploy. Give a barren advance, rake up a huge bill and ignore every invoice. Rush fees, heavy overtime and weekend work are expected to be free. You don’t get to sleep for days on end, but you do get to wait on your money forever. It’s people like this who cause company after company to go bankrupt.

The webmaster goes on to ask Fitness SF members to cancel their memberships and use social media to shame the company. Considering the huge number of gay IT freelancers in the Bay Area, watching this all play out might prove interesting, especially considering the excellent reputation the company recently earned when it broke away from Gold’s Gyms. (Tipped by JMG reader Birdie)

UPDATE: The story has broken on the advertising and design site, AdWeek.

You may dream about this, but no one ever does it. Until now. Frank Jonen, who runs his own small Web design company, claims he wasn’t paid properly by Fitness SF, one of his clients. So, he went and replaced the Fitness SF website with an angry letter about how evil the bastards at Fitness SF are. Amazing. To many, Jonen will be a hero. To others, he will now be someone they would never, ever hire for work.

AdWeek adds this initial response from Fitness SF: “Fitness SF disputes Frank Jonen’s claims, telling Adweek that Jonen was
paid and is now trying to blackmail the company and extort more money from
them.” A more detailed statement from Fitness SF is reportedly coming soon.  A person claiming to be Frank Jonen has made comments on the above-linked AdWeek article.

PREVIOUSLY ON JMG: In October 2010, it was revealed that the CEO of Gold’s Gyms had donated millions to Karl Rove’s anti-gay American Crossroads PAC. In response, all four San Francisco locations promptly announced that they would leave the parent company the minute their franchise agreements expired. Last fall those contracts ended and all four gyms immediately rebranded themselves as Fitness SF to loud applause from the LGBT community.