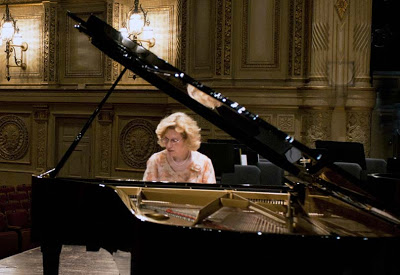 “In the 1960s, war protesters moved to Canada to live openly. I did the same in 2003. On several fronts, Canada was far ahead of the United States. Gay marriage was legalized by Canada in 2005. And thanks to its universal medical care I was able have corrective surgery at a superb clinic in Montreal. In the United States, once I came out as Sara, I couldn’t get bookings with the top orchestras anymore, nor would any university employ me.

“In Canada, the University of British Columbia in Vancouver hired me for a piano professorship in 2003, and in 2008 I earned tenure. After moving, I was able to marry the Japanese woman who’d been my longtime partner at a wedding before 125 family and friends. [snip] In 2003 I hadn’t played as a soloist with an American orchestra in nearly five years. But when I crossed the border to Canada, I found plenty of orchestras and recital presenters who were happy to book me.

“The success of my performing career in Canada has helped me rebuild a reputation back home. I’ve played twice now with the San Francisco Symphony, and also with the orchestras of Buffalo, Dayton, Seattle and others. I am confident I will once again play with the elite groups in Cleveland, Los Angeles, Philadelphia and New York, earning the same good reviews that David Buechner once did.” – Transgender concert pianist Sara Davis Buechner, writing for the New York Times.