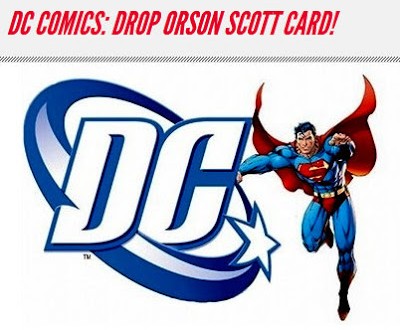 OUTRAGE: DC Comics has just hired anti-gay writer Orson Scott Card for their new digital Adventures of Superman. He’s written publicly that he believes marriage equality would lead to the end of civilization. He’s also on the board of a notorious anti-equality organization. We need to let DC Comics know they can’t support Orson Scott Card or his work to keep LGBT people as second-class citizens. They know they’re accountable to their fans, so if enough of us speak out now, they’ll hear us loud and clear. Sign and share!

That “anti-equality organization” is NOM. Orson Scott Card has called for Christians to overthrow the federal government over same-sex marriage.

What these dictator-judges do not seem to understand is that their authority extends only as far as people choose to obey them.  How long before married people answer the dictators thus: Regardless of law, marriage has only one definition, and any government that attempts to change it is my mortal enemy. I will act to destroy that government and bring it down, so it can be replaced with a government that will respect and support marriage, and help me raise my children in a society where they will expect to marry in their turn.

Last year Card campaigned for North Carolina’s ban on same-sex marriage and wrote this for the Greenboro Times:

The movie version of Card’s Hugo Award-winning Ender’s Game is due for release this November. Card is the co-producer.