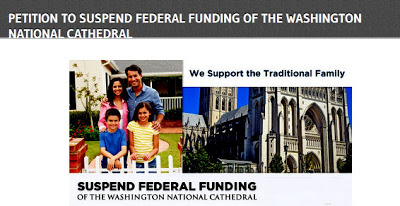 Failed presidential candidate and probable vampire Ralph Reed is ever so pissed about gay marriages at the National Cathedral.

In recent years, the National Cathedral has received hundreds of thousands of dollars in federal grants. The Episcopal Church is one of the richest denominations in the United States and the oldest. According to Richard Ostling of the Associated Press, “the 7,364 congregations of the Episcopal Church receive $2.14 billion in offerings a year: Their buildings and liquid assets are worth untold billions.” Why is a church with untold billions in assets and asking American taxpayers to fund their church? With this policy change, taxpayers are being asked to subsidize gay marriage ceremonies for a church that can readily access millions of their own funds. Pro-family and Pro-freedom Americans cannot sit idly by. We believe the definition of “marriage” to be the union of one man to one woman. If the National Cathedral wants to continue to receive taxpayer funding from Congress, they should respect Congressional action like the Defense of Marriage Act.

From the petition page: “Send a powerful message to Washington today by signing the petition below and making a contribution to the Faith & Freedom Coalition.”