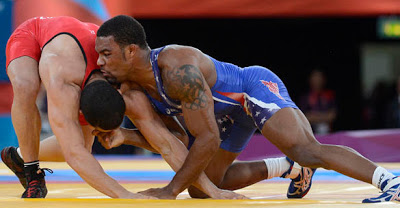 In a move sure to disappoint some gay fans, the International Olympic Committee has voted to drop wrestling as of the 2020 Games.  Among the criteria considered were the sport’s television ratings, ticket sales, anti-doping policy, global participation, and popularity.

“This is a process of renewing and renovating the program for the Olympics,” IOC spokesman Mark Adams said. “In the view of the executive board, this was the best program for the Olympic Games in 2020. It’s not a case of what’s wrong with wrestling, it is what’s right with the 25 core sports.” The loss of wrestling is a huge blow to the U.S., one of the most successful countries in Olympic wrestling, winning 124 medals. The U.S had two gold medalists at last summer’s London Games: Jordan Burroughs and Jake Varner. Coleman Scott added bronze along with Clarissa Chun in women’s freestyle. U.S. women have won four medals since women’s wrestling was added to the 2004 Athens Games. The former Soviet Union won 116 medals in the Olympics, and Russia 51. Wrestling featured 344 athletes competing in 11 medal events in freestyle and seven in Greco-Roman at the London Olympics.

A federation of wrestling groups is expected to appeal the decision at an upcoming IOC meeting. Prior to today’s move, it had been expected that the pentathlon would be the eliminated sport.  The most-recently discontinued Olympic sports are baseball and softball.  Golf and rugby will debut at the 2016 Games in Rio De Janeiro. [Photo: 2012 U.S. gold medalist Jordan Burroughs.]