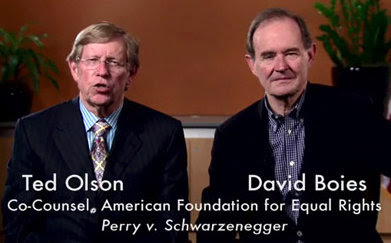 Next year, when all the dust has hopefully settled, Prop 8 attorneys Ted Olson and David Boies will publish a jointly-written book about their battle for marriage equality.

“Our collective journey tells of a crucial and historical civil rights movement that brings us closer to the ideals on which our country was founded,” Boies, 71, said in a statement issued by Viking. Olson, 72, said he and Boies between them have “nearly 100 years in the law.”  “We have never handled a more important, dramatic and emotionally compelling challenge,” he said in a statement. Viking, an imprint of Penguin Group (USA), promised the Boies-Olson book will be a “dramatic, intimate, and informed account of this historic issue.”

The book’s title: “A Just Cause: Law, Love, and the Case for Marriage Equality.”  It should be out sometime in mid-2014. (Tipped by JMG reader George)