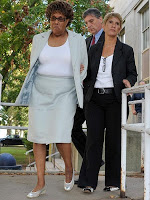 The Queens Democrat said that she used government grants for her charitable non-profit education organization, the Parents Information Network, to buy personal items and benefit family members. Huntley admitted that she utilized “straw recipients” to help disguise her embezzlement scheme from the charity, which was founded to help parents understand issues related to the New York City school system. Several large withdrawals of the money intended for the non-profit organization instead were slipped to some of Huntley’s relatives, officials said. “And did you know that was criminal conduct?” Brooklyn federal Judge Jack Weinstein asked at today’s hearing. “Yes, your honor, I did,” the ex-lawmaker answered. Huntley, who served in the state legislature from 2007 to 2012, admitted that she had committed felony mail fraud in furtherance of her embezzlement scheme. “I’m guilty. I plead guilty,” Huntley said.

Huntley faces two years in prison. If she serves time, she will become the fourth New York Senate Democrat sentenced to prison in the last eight months. While still in office, Huntley gained notoriety for declaring that she would never vote for marriage equality, “not even if you gave me a million dollars tax-free.”  Huntley later flip-flopped and did vote in favor of the marriage bill that ultimately passed in 2011.  Despite the fact that she had been arrested for corruption, NOM claimed to have defeated Huntley over her marriage vote when she lost her September 2012 primary.