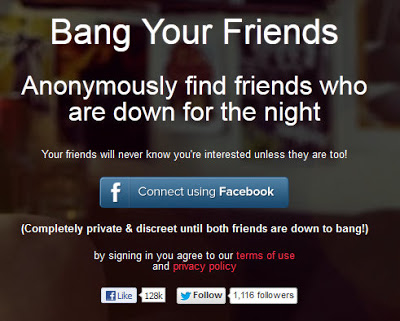 Dan Savage call this “another attempt at Grindr for straights.”

By definition the guys a woman meets through Bang With Friends aren’t strangers. These are guys that the women on the site know. (In theory at least—some people are Facebook friends with strangers.) And while a woman can certainly be victimized, infected, sexually assaulted, or knocked up by a guy she knows, a woman is more likely to… know something about a guy she knows. She’s likelier to have some sense of whether this guy is a good guy or a bad guy, she may know other women he’s been with (or, ahem, she may know the woman he’s currently with), and she may have some friends in common. That last bit is especially important: a sexually impulsive act with someone in your social circle comes with a degree of social accountability. Anonymous hookups do not. And it’s that degree of social accountability that’s key, I think, to making a Grindr for straight people work.