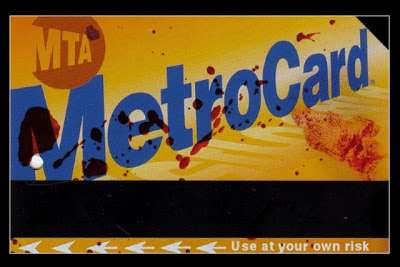 Members of NYC’s subway workers union are handing out fake MTA cards today in a campaign urging to the city to act on the rising number of passenger deaths and injuries. Several riders have been murdered in recent months by being pushed onto the tracks by mentally ill people.

“The union is sponsoring the outreach to bring public attention to the grave dangers facing passengers every day on the tracks,” said a union spokesman, who said that, while the MTA is investigating “numerous high-tech solutions that would cost billions of dollars and take decades to implement,” the union already has “a quick, easy and no-cost solution.” Subway deaths spiked in 2012, with 55 people killed, up from 47 in 2011 — the highest number of deaths since 2007, according to Metropolitan Transportation Authority stats.

The deaths have sparked interest in potential protections for straphangers, including calls to install pricey platform screen doors, like the ones seen in some European cities and on the JFK AirTrain, plans to rig subway platforms with “intrusion technology” that would sound alerts when someone steps onto the tracks, as well as the union’s slow-down plan. The union, which is currently in contract negotiations with the MTA, also wants the MTA to put agents on crowded platforms and install emergency shut-offs to tracks in station booths.

MTA officials have said that installing platform-long barriers and doors is unworkable because the system presently uses several different models of cars, meaning that the doors would not line up for some trains. The MTA is considering testing such a system on the L line, which does not share tracks with other lines and uses only one model of train.