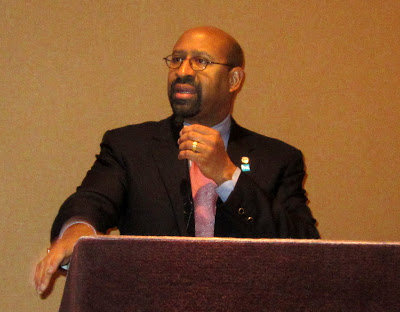 Philadelphia Mayor Michael Nutter spoke today at the Haas Convening for gay journalists, where he explained his desire to make Philly “the nation’s most progressive city.” Tomorrow we’ll visit the construction site for Philadelphia’s coming housing center for gay seniors, which had its groundbreaking with Nutter in November.

UPDATE: When Nutter took the podium, lots of folks took out their phones to tweet out photos.  He turned the tables on us by taking out his own phone. I had just crept up to the front of the room to get a better shot.