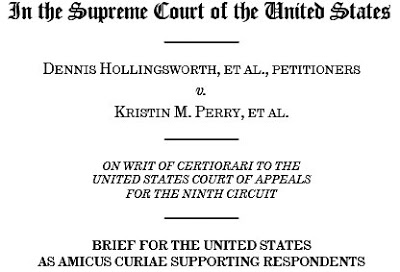 SCOTUSblog has an analysis:

Much of the logic of the government’s brief — its first entry into the controversy over California’s Proposition 8 — could be read to support a right to marriage equality in every state, but it did not endorse that idea explicitly. [Snip] In essence, the position of the federal government would simultaneously give some support to marriage equality while showing some respect for the rights of states to regulate that institution.

What the brief endorsed is what has been called the “eight-state solution” — that is, if a state already recognizes for same-sex couples all the privileges and benefits that married couples have (as in the eight states that do so through “civil unions”) those states must go the final step and allow those couples to get married. The argument is that it violates the Constitution’s guarantee of legal equality when both same-sex and opposite-sex couples are entitled to the same marital benefits, but only the opposite-sex couples can get married.

The eight states that apparently would be covered by such a decision are: California (whose Proposition 8, which denies marriage to couples who already have all of the other marital benefits, would fall), Delaware, Hawaii, Illinois, Nevada, New Jersey, Oregon, and Rhode Island.