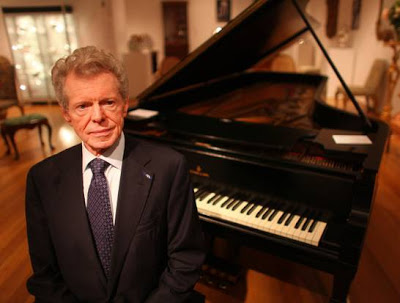 Renowned concert pianist Van Cliburn, who in 1998 was unsuccessfully sued for palimony by his former partner in a case that made global headlines, has died of bone cancer at the age of 78.

Mr. Cliburn, a Texan, was a lanky 23-year-old when he clinched the gold medal in the inaugural year of the Tchaikovsky competition, and the feat, in Moscow, was viewed as an American triumph over the Soviet Union at the height of the cold war. He became a cultural celebrity of pop-star dimensions and brought overdue attention to the musical assets of his native land.

When Mr. Cliburn returned to New York, he was given a ticker-tape parade in Lower Manhattan, which offered the sight of about 100,000 people lining the streets and cheering a classical musician. In a ceremony at City Hall, Mayor Robert F. Wagner proclaimed that Mr. Cliburn’s accomplishment was “a dramatic testimonial to American culture” and that “with his two hands, Van Cliburn struck a chord which has resounded around the world, raising our prestige with artists and music lovers everywhere.”

Here’s his most famous piece.