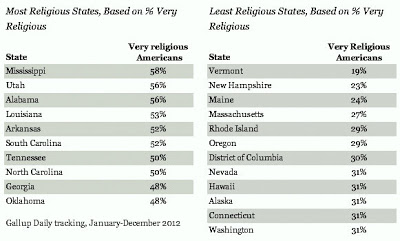 The Friendly Atheist observes: “Incidentally (and also according to Gallup), Mississippi ranked at the top or near the top of the list of states when it came to obesity, inability to afford food, and least livable place. When people don’t have a lot going for them, it’s understandable they would turn to religion. If only they would realize God isn’t helping their situation.”