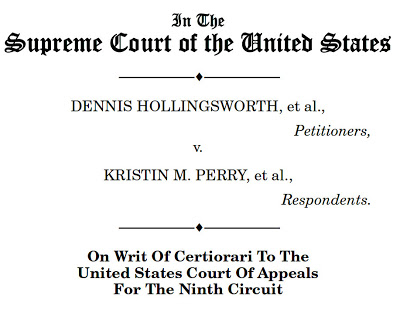 The Mormon Church, the Southern Baptists Convention, the National Association of Evangelicals, the Orthodox Jewish Union, and a sect of the Lutheran Church have filed a joint Supreme Court brief against the overturn of Proposition 8.  Chris Johnson reports at Washington Blade:

The brief offers three major reasons for why the Supreme Court should uphold Prop 8, which the court is currently reviewing as result of pending litigation known as Hollingsworth v. Perry: 1) Prop 8 reflects a rational choice amid conflicting views of marriage, not prejudice; 2) Prop 8 should not be invalid because it expresses the views of religious voters; 3) Prop 8 is in line with the values of California voters and more likely to sustain the institute of marriage.

“Proposition 8 expresses the people’s sense that society should continue preserving marriage as the institutional bond joining together and protecting a husband, a wife, and their children,” the brief states. “That complex judgment was no doubt influenced by traditional marriage’s roots in California’s history, culture, laws, and diverse religions and by the public goods the people understand it provides in erecting an orderly social mechanism to cope with natural reproduction … and in protecting the family setting where children thrive best … and best acquire the ‘moral powers requisite for politically liberal citizenship.’”

The brief concludes: “The people of California violated no one’s civil rights when they adopted Proposition 8. Their twice- expressed preference for the traditional definition of marriage over an untested rival conception was thoroughly rational. It is therefore thoroughly constitutional.”

The coalition has also filed a brief against the overturn of DOMA. So much for the Mormon Church’s big PR push about now being gay-friendly. It also bears mentioning that the National Association of Evangelicals was once headed by Ted Haggard.

Previous Chris Christie On Letterman
Next Headline Of The Day