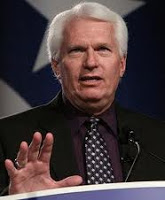 “Instead of standing with the Christian leader of their day, the disciples of Christ fled like panicked sheep when he came under direct attack. I had thought and hoped Tebow was made of sterner stuff. Tebow needs to clarify and expand on his remarks immediately, and undo this disastrous decision. Dr. Jeffress is a man of unconditional love and will gladly receive him back. If Tim Tebow doesn’t reverse field here, much more than his NFL career is in jeopardy.” – Hate group spokesman Bryan Fischer, responding to Tebow canceling his appearance at the megachurch headed by crackpot Robert Jeffress.

UPDATE: Jeffress is claiming that Tebow will reschedule “once the current controversy blows over.”

Previous Missed Connections
Next Ben Ivory – The Righteous Ones