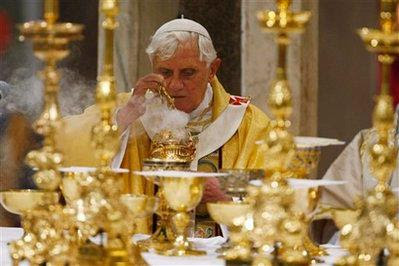 Pope Benedict XVI said Monday he lacks the strength to fulfill his duties and on Feb. 28 will become the first pontiff in 600 years to resign. The announcement sets the stage for a conclave in March to elect a new leader for world’s 1 billion Catholics. The 85-year-old pope announced the bombshell in Latin during a meeting of Vatican cardinals, surprising even his closest collaborators, even though Benedict had made clear in the past he would step down if he became too old or infirm to do the job.

Benedict called his choice ‘‘a decision of great importance for the life of the church.’’ Indeed, the move allows the Vatican to hold a conclave before Easter to elect a new pope, since the traditional mourning time that would follow the death of a pope doesn’t have to be observed. It will also allow Benedict to hold great sway over the choice of his successor. He has already hand-picked the bulk of the College of Cardinals — the princes of the church who will elect the next pope — to guarantee his conservative legacy and ensure an orthodox future for the church.

More on this all day…

UPDATE: NOM has a fist reaction.