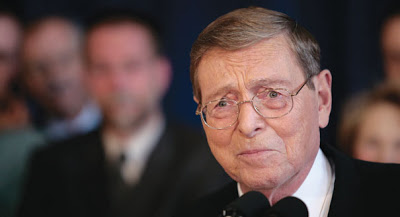 When he was in Congress, former Sen. Pete Domenici (R-NM) racked up an impressive record of opposing every bit of LGBT-related legislation that came up.  He voted for a constitutional ban on same-sex marriage. He twice voted against the Hate Crimes Act.  He voted for DOMA.  He voted against ENDA.  He earned 0% ratings from both the HRC and ACLU, which made him proud.

Because, you know, Jesus.

But one thing Domenici didn’t oppose was some sack time with the daughter of another Senator.

Former Sen. Pete Domenici of New Mexico revealed Wednesday that he fathered a child outside his marriage three decades ago with the daughter of another former senator. Domenici, 80, a Republican who served six terms in the Senate before retiring in 2008, and the mother of the child each released statements to the Albuquerque Journal acknowledging Domenici’s fatherhood. “I deeply regret this and am very sorry for my behavior,” Domenici said. “I hope New Mexicans will view that my accomplishments for my beloved state outweigh my personal transgression.” The child, now grown, was identified as Adam Paul Laxalt, a lawyer in Las Vegas. His mother, Michelle Laxalt, is the daughter of Paul Laxalt, a Republican who represented Nevada in the Senate for 12 years before leaving in 1987.

A devout Catholic, Domenici also earned a 0% rating from Americans United for Separation of Church and State. Because: Jesus.

Previous John McCain Vs Constituents
Next From NOM’s Marketing Kingpin