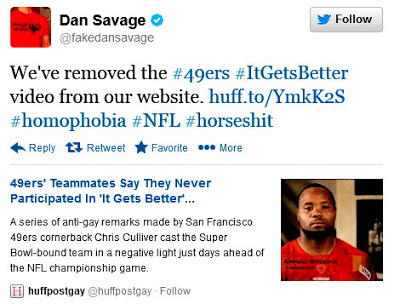 Yesterday Dan Savage removed the It Gets Better anti-bullying clip recorded by the San Francisco 49ers after two of the players that appeared in the clip denied having taken part.

Though Culliver has since apologized for the controversial statements, the backlash seems unlikely to dissipate now that a new wrinkle has emerged. The 49ers’ linebacker Ahmad Brooks and nose tackle Isaac Sopoaga, both of whom participated in the team’s widely-praised “It Gets Better” video last summer, have denied ever producing the clip.  The players told USA Today Sports that they didn’t realize the video’s aim was to specifically combat bullying experienced by lesbian, gay, bisexual and transgender (LGBT) teens.  “This is America and if someone wants to be gay, they can be gay,” Brooks told the publication. “But I didn’t make any video.” Later, after he was reportedly shown the video on an iPhone, the player clarified, “Oh, that. It was an anti-bullying video, not a gay [rights] video.”  Even more curiously, Sopoaga similarly denied taking part in the clip, even as a teammate reportedly tried to jog his memory. “I never went,” he declared. “And now someone is using my name.”