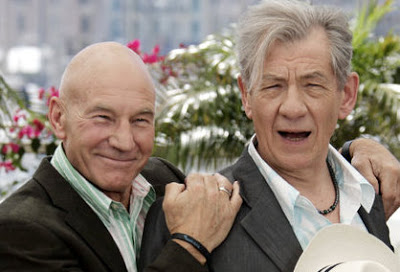 X-Men Stars Are Coming To Broadway

Via the NYT’s Arts Beat:

The theater and film stars Ian McKellen and Patrick Stewart, known for their chemistry in the “X-Men” films as the friends-turned-foes Magneto and Professor Xavier, will return to Broadway together in the fall for an unusual two-play repertory of Harold Pinter’s “No Man’s Land” and Samuel Beckett’s “Waiting for Godot,” the producers said on Thursday. Directed by a fellow Englishman, Sean Mathias, the two plays – both bleakly funny existential classics by Nobel Prize-wining writers — will run in rotation, sometimes on adjacent nights and possibly on the same days as matinee and evening performances.