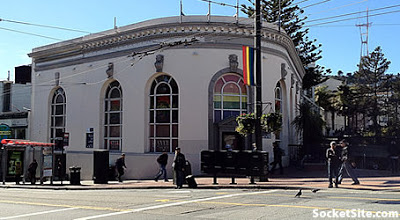 RUMOR: Apple Store For The Castro

An historic landmark building at the epicenter of San Francisco’s gay district is rumored to become the city’s fourth Apple Store. Citing “plugged in tipsters,” real estate blog SocketSite noted today that Apple is rumored to have set its sights on the property, which originally served as a Bank of America. The building has most recently served as a Diesel apparel store, which unexpectely closed this month after the building’s landlord reportedly demanded a 50 percent rent increase. The side of the building was remodeled to partition off a separate space originally housing a Noah’s Bagels and subsequently used by a Sprint store. Since its closing, the space has remained vacant for years. The two empty spaces could be rejoined into a larger, single space, with dramatic high ceilings.