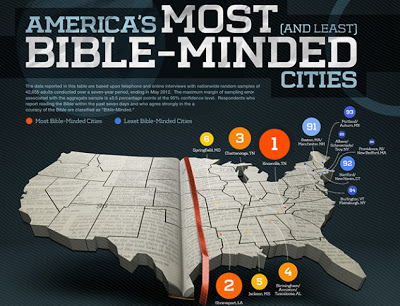 From a national survey conducted by the Barna Group. “Individuals who report reading the Bible in a typical week and who strongly assert the Bible is accurate in the principles it teaches are considered to be Bible-minded.”

Regionally, the South still qualifies as the most Bible-minded. The top ranking cities, where at least half of the population qualifies as Bible-minded, are all Southern cities. This includes the media markets for Knoxville, TN (52% of the population are Bible-minded), Shreveport, LA (52%), Chattanooga, TN (52%), Birmingham, AL (50%), and Jackson, MS (50%). Other markets in the top 10 include Springfield, MO (49%), Charlotte, NC (48%), Lynchburg, VA (48%), Huntsville-Decatur, AL (48%), and Charleston, WV (47%). The least Bible-oriented markets include a mix of regions, but tend to be from the New England area.

Easily the lowest Bible-minded scores came from Providence, RI (9%) and Albany, NY (10%). To put this in perspective, the most Bible-minded markets are five times more likely to have residents who qualify as Bible-minded than is true in these two Northeastern cities. Though these two cities are the most extreme, none of the cities in the bottom 10 break 20%, where even one in five people could be considered Bible-minded. The New England area is home to most of the markets in the bottom 10 Bible-minded cities, including Burlington, VT (16%), Portland, ME (16%), Hartford, CT (16%), Boston, MA (16%), Buffalo, NY (18%) and New York, NY (18%).

The full ranking is here.