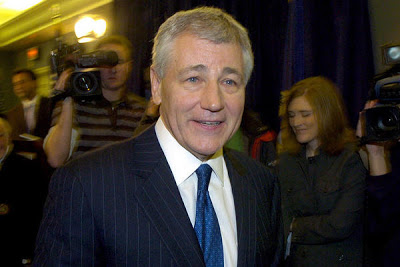 Quote Of The Day – Chuck Hagel

“I fully support the Don’t Ask, Don’t Tell Repeal Act of 2010 and value the service of all those who fight for our country. I know firsthand the profound sacrifice our service members and their families make, and if confirmed as Secretary of Defense, I will do everything possible to the extent permissible under current law to provide equal benefits to the families of all our service members.” – Chuck Hagel, in a letter to Sen. Barbara Boxer.

“For years the Pentagon has been dragging its feet with regard to extending benefits to the families of gay service members. To ensure that action is taken on this front, we need to be sure that there is a champion for our cause at the helm of the defense department. There is nothing in Hagel’s record to suggest he will be that champion. “While Senator Hagel’s recent professed support for gay military families is encouraging, it stands at odds with his record of opposition to the repeal of Don’t Ask, Don’t Tell and his broader record of opposition to equality for gay and lesbian Americans. We look forward to the confirmation hearings when the Senator will be able to explain his apparent epiphany in greater detail. We continue to remain cautious about his nomination until that time.”