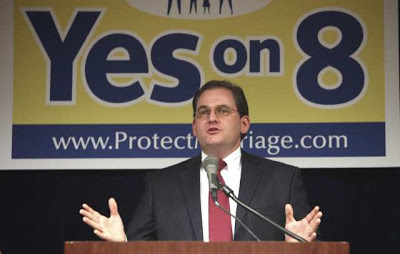 Protect Marriage, the primary backers of Proposition 8, is reportedly so in debt to their lawyers that it may affect their ability to defend their Supreme Court case.

ProtectMarriage.com, the advocacy group defending a California gay marriage ban now under review by the high court, showed a $2 million deficit in its legal fund at the end of 2011 – the third year in a row that expenses exceeded donations, federal tax records show.  The 2012 accounts are not yet available. ProtectMarriage.com says it has since covered the 2011 shortfall. However, it is still $700,000 short in fundraising for its Supreme Court costs, according to a ProtectMarriage.com attorney, Andrew Pugno.

That message has gone out to donors, with some urgency, as the Supreme Court prepares to hear arguments in March in its first thorough review of same-sex marriage. “Unless the pace of donations starts to pick up right away, we could soon be forced over a financial cliff,” ProtectMarriage.com said in an email to donors earlier this month. ProtectMarriage.com’s lead outside counsel, Charles Cooper, has not stopped work on the Supreme Court case, although he declined to comment on financial arrangements with clients.

Speaking of Charles Cooper, his firm has been raking in the millions.

Now that this story has hit the national press, watch the money roll in.