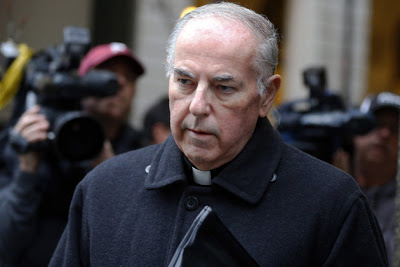 Yesterday Father Charles Englehart was found guilty of molesting an altar boy in the 1990s.  The case is tied to the same cover-up scandal for which a Catholic official was sent to prison last year. Via National Catholic Reporter:

The jury of eight men and four women found Fr. Charles Engelhardt guilty of indecent assault of a minor, corruption of a minor and conspiracy, but could not come to agreement on a count of indecent sexual assault, according to the Associated Press. In addition, Bernard Shero, a former Catholic school teacher at St. Jerome parish school, was found guilty of rape and indecent sexual assault, among other charges.

Engelhardt’s conspiracy charge was tied to former priest Edward Avery — accused as well by the same boy, who was 10 years old at the time of the abuse — who pleaded guilty in March 2012 to charges of conspiracy and sexual assault. Avery appeared during the trial, taking the stand and testifying that he issued a false guilty plea, denying he abused the boy, and only said he did in order to avoid a longer sentence. He is currently serving two-and-a-half to five years in sentence.

Another priest whose crimes were allegedly cloaked by the Archdiocese of Philadelphia is scheduled to go to trial in the next few months.