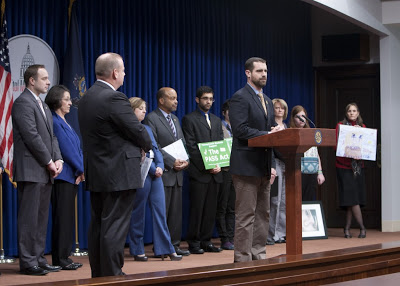 Openly gay Pennsylvania state Rep. Brian Sims was only sworn in a couple of weeks ago and he’s hit the ground running by helping to build a large bipartisan coalition behind an anti-bullying bill that he promises will be stronger than “toothless bills” in other states. There are now 67 co-sponsors of the bill, including several Republicans. Philly Now reports on the details.

The PASS Act, already endorsed by Equality PA and the SEIU, would amend the Public School Code of 1949, by “further providing for program of continuing professional education; and, in safe schools, further providing for definitions, for reporting and for policy relating to bullying and providing for powers and duties of Department of Education.” Among those amendments would be the definition of bullying to be “any written, verbal or physical conduct,” related to a characteristic like race, color, religion, “sexual orientation,” and “gender identity,” among other things. The bill also includes a definition of “cyberbullying,” school-sponsored events, and electronic communication.

The bill itself would attempt to train educators on preventing bullying in a school setting, as well as creating new guidelines for reporting such bullying in schools. “Especially following Matthew Shepard, we saw a whole bunch of states pass anti-bullying legislation, which I call ‘toothless bills,’” says Sims. “They didn’t specifically enumerate the classes of people that need to be protected. They didn’t have reporting requirements, they didn’t have time frames on reports, they didn’t say what needed to be included in reports and I think this is very different. This bill protects those people from bullying and it will actually curb bullying—not just lend it lip service.”

The PASS Act is awaiting action before the state House Education Committee. We’ll watch this closely.

Previous Syron – Here
Next Poll Of The Day