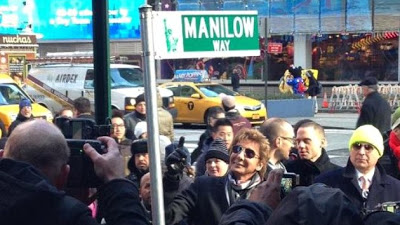 Gossip rags are claiming that “women of a certain age” threw a fit outside Broadway’s St. James Theater yesterday after Barry Manilow abruptly canceled a performance due to a onset of “brutal bronchitis.” The cancellation came shortly after an interview with “feared” New York Post theater critic Michael Riedel.

Once onstage, Manilow’s voice suddenly gave out, and he was forced to cancel the performance which was to be attended by critics. His rep said in a statement, “With deep apologies, and due to a sudden and brutal case of bronchitis, tonight’s show will be postponed until Feb. 26. Mr. Manilow can be found on the Brooklyn Bridge, getting ready to jump.” A source close to Riedel denied his interview had precipitated the steep decline in Manilow’s health, insisting, “Riedel spreads gossip, not germs.” Meanwhile there were scenes of chaos on 44th Street as fans learned that the show would not go on. One witness said, “A riot has broken out. Traffic is stopped on the entire street. There were middle- aged ladies losing their minds and mounted police.”

Manilow’s show is a “greatest hits” 49-song limited engagement that is scheduled to run through February 23rd.  Yesterday the mayor’s office renamed West 44th Street in his honor.

RELATED: In September 2011 Manilow endorsed Ron Paul for president and contributed to his campaign.

Previous Anderson Cooper: This Is Beyonce’s World And We’re Just Living In It
Next House Suspends Debt Ceiling