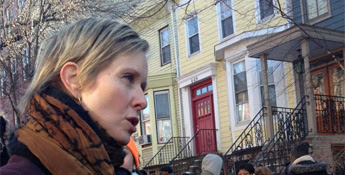 “To me, identity politics is not really where it’s at,” said Cynthia Nixon after Bill de Blasio officially announced his campaign for mayor in Park Slope this afternoon. Nixon, best known for playing Miranda on Sex and the City, was responding to my question about why she’s supporting Bill de Blasio for mayor instead of City Council Speaker Christine Quinn, who, like Nixon, is an openly gay woman. Standing outside de Blasio’s Park Slope home, Nixon said, “I really want a candidate who believes what I believe. And so, for example, you know, that person that you’re mentioning doesn’t support paid sick leave and to me that is an issue that certainly, as a progressive, one has to be behind that issue.”

As City Council Speaker, Quinn has blocked a vote on the paid sick leave bill, which has 37 supporters on the City Council, more than enough to override a veto by Mayor Bloomberg, who also opposes the bill.  To my knowledge, Cynthia Nixon is (so far) the highest-profile openly gay New Yorker to oppose Quinn for mayor. (Tipped by JMG reader Bill)