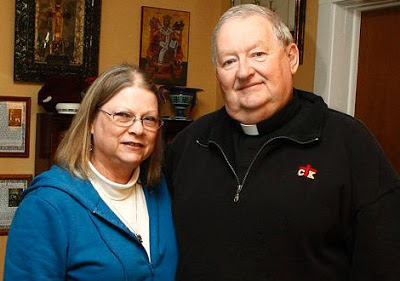 A former Episcopal priest who is pissed off about his sect’s acceptance of homosexuality has become New York state’s first married Catholic priest.  As part of the deal, he’s agreed to stop fucking his wife.

John Cornelius will be ordained a Roman Catholic priest this weekend — and with the blessing of his wife they’re giving up their sex life. Cornelius, a father of three, will become the first married Roman Catholic priest in New York — and Sharyl, his wife of 33-years, has agreed to the whole celibacy thing. “We have decided to do that voluntarily,” Cornelius told WGRZ-TV. “I have always had friends that are Roman Catholic priests and I appreciate what they’ve given up to serve God and the priesthood.” Cornelius, 64, is a former Episcopalian priest who converted three years ago to Catholicism. He said his old church had gotten too liberal for him. “There was the ordination of the homosexual priest in New England,” he said. “Then it came time for women’s ordination. … It may have been okay for other people, but it was just too much for me. “I needed someplace where there was order,” he added.

Mrs. Cornelius is reportedly thrilled with the new arrangement.