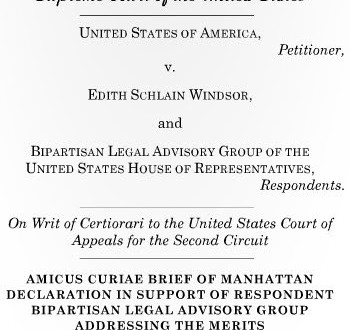 The backers of the Manhattan Declaration, whose signees vow to disobey laws that grant discrimination protections to LGBT Americans, have filed a Supreme Court brief against the overturn of DOMA. Because…JESUS.

The Manhattan Declaration reminds the Court of the critical role of believers in Jesus have had in America’s positive social achievement. It recounts advances because of Christianity through history saying that, “History confirms that Christians have, precisely because of their faith: defended innocent life; tended to the sick and dying during plagues…; extirpated slavery; tended to the poor and imprisoned…; toiled in the women’s suffrage movement; led the civil rights movement; fought to end human trafficking and sexual slavery; and brought compassionate care to the AIDS sufferers in Africa.”