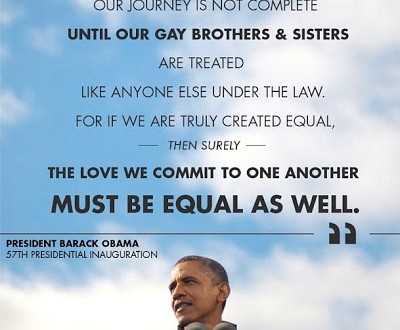 In his second Inaugural today, President Obama traced the moral arc from Seneca Falls to Selma to Stonewall, and rightly exalted the struggle for the freedom to marry as part of America’s moral commitment to equality, liberty, and the pursuit of happiness. Freedom to Marry applauds our president and the moral leadership he has shown, the moral leadership we will continue to need until all Americans, all loving couples, all families, can share fully in the American promise we celebrate on Inauguration Day.

We couldn’t agree more. It’s now time for the president — and for all of us — to finish the job of ensuring that every American gets a fair shake. President Obama has repeatedly shown he is willing to fight for us. We have another four years to keep the momentum going, and will be vigilant in pursuing policies to ensure our community is not left behind. This includes pushing for federal LGBT employment protections, ending the so-called Defense of Marriage Act, combating HIV/ADS, preserving a social safety net, and much more. America deserves nothing less than a president who will treat all families fairly. We congratulate President Obama and his administration and look forward to working with them in this second term to build a stronger future for LGBT people and opportunity for all.

Today, President Obama made history with a clear and passionate declaration of the fundamental rights of LGBT Americans, and all Americans. We honor the work of his first term – especially his leadership in the repeal of “Don’t Ask, Don’t Tell” – and expect great progress over the next four years on the very real inequalities that exist for our LGBT service members, veterans, and their families as we work together to bend the moral arc of the universe toward justice.