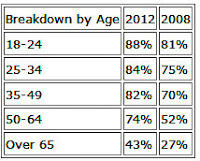 According to a just published survey, 75% of Irish voters ages 18 and over say they would vote to legalize same-sex marriage. Irish Marriage Equality reacts:

“Public support for marriage equality has increased year on year. When we began our work in 2006, 51% of people believed same sex couples should be allowed to marry. That figure has grown 25% in just 6 years, to a full three quarters of the population today. People all over Ireland know that marriage equality is about truly Irish values like justice, equality, fairness, and respect for each other. This is our chance to do the right thing, and be leaders in the movement for marriage equality. The polling shows Irish people want this. Ireland is ready, with a strong majority of Irish people who think same sex couples should have the right to marry the person they love.”

Marriage equality has been placed on the official agenda for Ireland’s Constitutional Convention in mid-April.  Zoom, zoom, zoom. (Tipped by JMG reader Ronan)