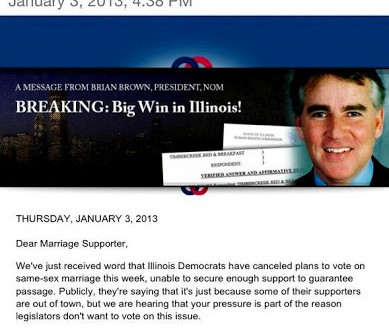 There’s a bit of confusion in the activism back channel as to what’s going on, since earlier reports indicated that we were done for the week in Illinois. But click over right now and watch as an Illinois Senate committee debates its marriage equality bill. At this writing some bigot is droning in the familiar manner about the oppression of Christianity.

UDPATE: The bill just PASSED out of its committee by an 8-5 vote!!!  On to the full chamber!

UPDATE II: The below message from NOM is now being gleefully passed around on Twitter. Snork!