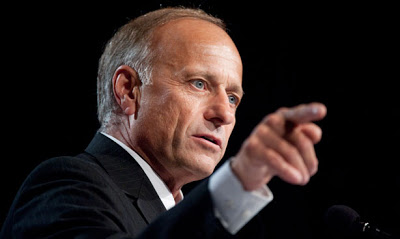 Tea Party hero Rep. Steve King (R-IA) has introduced a bill that would deny American citizenship to the children of undocumented immigrants.

The bill would amend section 301 of the Immigration and Nationality Act to clarify those classes of individuals born in the United States who are nationals and citizens of the United States at birth. It’s generally thought that the 14th Amendment provides a constitutional guarantee of citizenship for anyone born in the United States — known as “birthright citizenship” — but King told Hotsheet last year that he does not interpret the 14th Amendment that way. So far, King’s bill has three co-sponsors listed: Reps. Phil Gingrey (R-Ga.), Gary Miller (R-Calif.) and Rob Woodall (R-Ga.).

This is just more teabagger grandstanding.

Previous Photos Of The Week
Next AFA Opposes Hagel Too