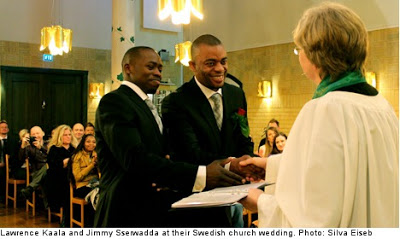 A couple who claim to be the first Ugandan men to be legally married face an uncertain future after recently tying the knot in a Swedish church, with one facing possible deportation that the other fears could result in his husband’s death. Last weekend, Lawrence Kaala and Jimmy Sserwadda were all smiles as they exchanged vows in a crowded church in the north Stockholm suburb of Järfälla. “It feels great,” Sserwadda tells The Local after the wedding, which was attended by more than one hundred guests – including Sweden’s EU Minister Birgitta Ohlsson. “We had been separated in such a hostile environment; we didn’t know if we’d ever see each other again.”

The ceremony was supposed to be a fairy-tale ending to an improbable story for the two men who found themselves reunited in Sweden years after their relationship had been cut short due to persecution in their native Uganda. “Uganda is about the worst place in the world to live as someone who is openly gay,” Sserwadda explains. But while Sserwadda’s asylum application has been approved, Kaala learned just days before the ceremony that his application had been denied, meaning he will have to leave Sweden in two weeks if he doesn’t file an appeal.

The couple fled Uganda in 2008 after one of them was arrested and beaten by police. (Tipped by JMG reader Jay)

Previous Haters Have The Boy Scouts Sadz
Next Obama On Immigration Reform: Don’t Forget That You Used To Be Them