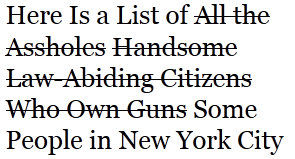 Following a similar move by an upstate New York newspaper, yesterday Gawker published a searchable list of the people who have gun permits in New York City.  John Cook writes:

Below is a 446-page list of every licensed gun owner in New York City. I obtained it from the NYPD two-and-a-half years ago via a Freedom of Information Law request. Because the NYPD is more interested in raping and/or eating ladies and spying on Muslims than it is in honoring public records law, the list contains only the names, and not the addresses, of the licensees. (If you’re curious, here’s what section 400.00 of the Penal Law of New York, entitled “Licenses to carry, possess, repair and dispose of firearms,” has to say on the matter: “The name and address of any person to whom an application for any license has been granted shall be a public record.” The only way to get the associated addresses from the NYPD, as the law requires, would be to take them to court, which no one has apparently done.)  I reported in 2010 that the names of Fox New chief Roger Ailes, his mouthpiece Sean Hannity, Howard Stern, Don Imus, Donald Trump and Donald Trump Jr., and Estee Lauder heir Ron Lauder appear to have permits to carry or own guns in the city—though the lack of addresses makes it difficult to verify that it’s Howard Stern the radio personality as opposed to Howard Stern the accountant from Queens. If you want to have an intern scour it for “liberals,” Ann, have at it.

It is unknown how many unlicensed guns are in New York City homes, but yesterday a local newsman idly speculated that the number could be even higher than the ones that are legally registered.

Previous The Best Time To Buy Anything
Next Just Because