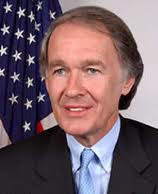 Former Rep. Barney Frank, who still wants to be appointed interim Senator, has endorsed Rep. Ed Markey for the special election that will be held in several months assuming that John Kerry is confirmed for Secretary of State.

Markey was the first candidate to announce that he is running in the special election. Frank’s endorsement comes days after Kerry, Victoria Kennedy, the Democratic Senatorial Campaign Committee and other Democratic groups announced that they are backing Markey, in an apparent attempt to coalesce around one Democratic nominee and avoid a contentious primary. However, not all Democrats are ready to unite around Markey. U.S. Reps. Michael Capuano of Somerville and Stephen Lynch of South Boston and state Sen. Benjamin Downing of Pittsfield are all still considering running.

Markey has been a member of the House for 36 years. He has a 100% rating from the Human Rights Campaign.